A collaboration between Sage Geosystems™ and Metamaterial Inc. codenamed “Pluton” seeks to apply new metamaterial technology to produce utility scale geothermal power at 4¢ per kWh, a 32-60% reduction compared to a current cost of 5.9-10.1¢. Geothermal is currently a niche source of electricity limited to only certain natural locations and hampered by high capital cost.  To unlock the potential, a subsurface Thermo-Electric Generator system (TEG), able to operate in more moderate temperature and much more prevalent “dry hot rock” locations, should dramatically expand the number of suitable sites around the United States and the world. Moreover, unlike intermittent wind and solar, which require much more land area, geothermal has the potential to become an abundant source of clean, compact, renewable baseload power. SAGE and META are working to address technical requirements and demonstrate a prototype in 2021.

In principle, geothermal is an ideal source of renewable electricity. Heat from deep beneath the Earth’s surface is abundant, virtually emission-free, and always available to supply baseload power. In practice, however, geothermal accounted for only a tiny fraction (0.4%) of the approximately 4.01 trillion kWh of electricity generated at utility scale electric power plants in the U.S. in 2020. This is because the vast majority (> 98%) of installed geothermal plants depend on naturally occurring geothermal reservoirs containing hot fluid, typically found near the boundaries of the Earth’s tectonic plates. Nearly all of the current U.S. geothermal capacity is located in California and Nevada.

Technical Efforts to Expand Geothermal Reach Have Been Limited

Enhanced Geothermal Systems (EGS), are man-made reservoirs, created by hydraulic fracturing the rock. This creates a network for heat transfer. Geothermal fluid is injected into the rock to create a reservoir and heated fluid is pumped to the surface through production wells. However, this approach also has challenges. Short circuiting may produce disappointing results. An EGS system, like conventional hydrothermal, requires at least two wells, increasing capital costs, which may make the LCOE (levelized cost of energy) for the power produced uncompetitive compared to wind or solar. And, during reservoir creation, rocks may slip along pre-existing fractures and produce micro-seismic events. 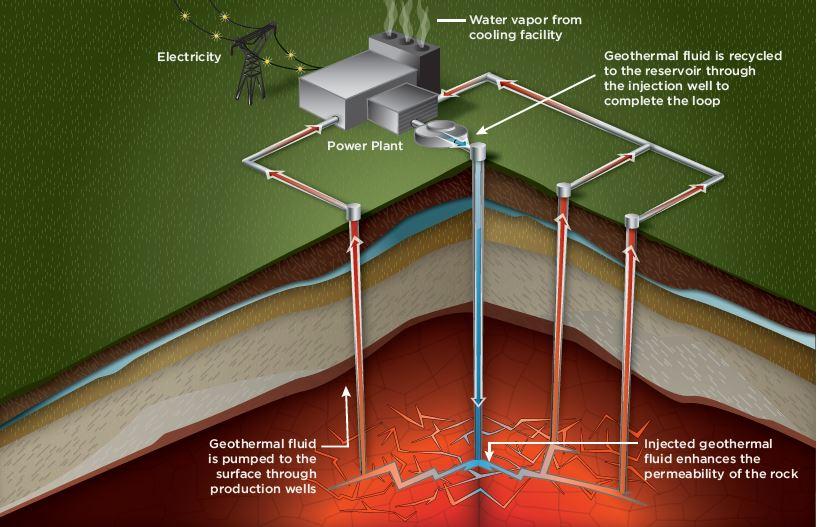 The SAGE-META project will target mid-enthalpy (150-250°C) dry and sedimentary rock which is more accessible throughout the United States and the world. The areas shaded in yellow through orange on the map below show the locations where these temperatures exist at depths of 5.5 kilometers (approximately 18,000 feet). 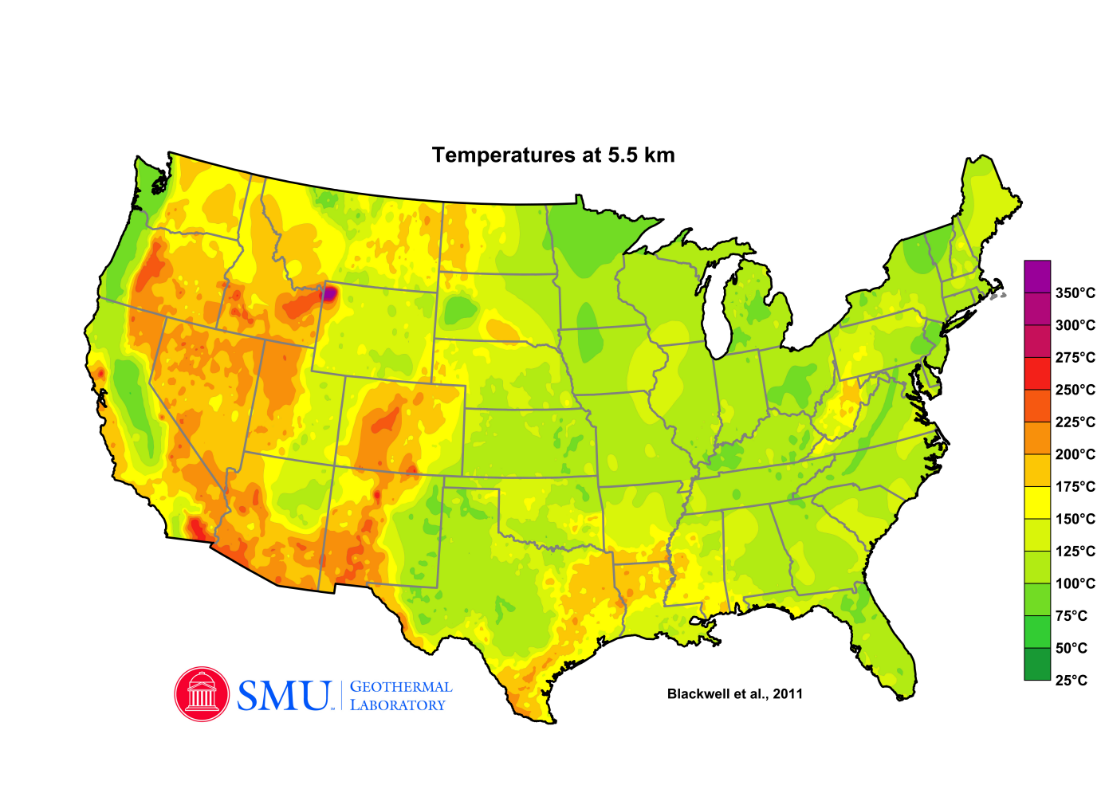 Sage Geosystems™ envisions a closed loop vertical geothermal single-well design, reducing capital cost. In addition to new dry rock locations, it could be used to recomplete underperforming hydrothermal wells and depleted deep natural gas wells. Cooled fluid is pumped from the surface down the outer ring of a double-walled tube. Heated fluid returns to the surface via the inner tube. This results in no discharge to the air of hydrogen sulfide or steam during operation and no fluid exchange or loss with the subsurface. 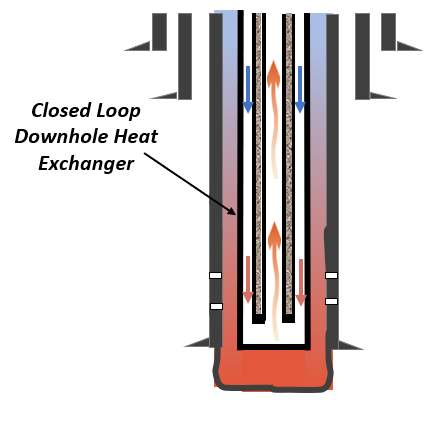 Of the 735MW of U.S. utility scale geothermal power plants built since 2000, nearly 90% are binary-cycle plants. Low to moderately heated (below 400°F) geothermal fluid from below the surface passes through a heat exchanger, where a secondary fluid with a much lower boiling point flashes to vapor and drives the turbine generator (as illustrated below). The SAGE-META design would eliminate the need for a turbine generating plant by placing Thermo-Electric Generators (TEGs) into the wellbore to harvest electricity directly from the temperature differences that naturally exist in the well. 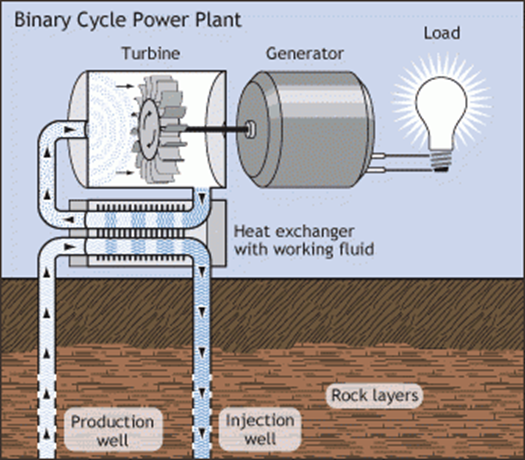 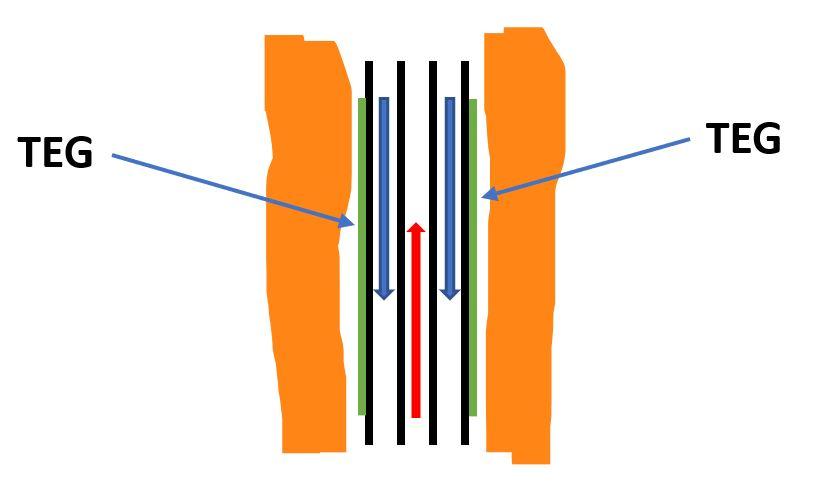 A thermo-electric system creates direct current (DC) power via the Seebeck effect. A temperature difference between two materials (conductors or semiconductors) produces a voltage difference between the two materials. The amount of power produced depends on the temperature difference and the efficiency of the materials. Thermoelectric materials must have both high electrical conductivity and low thermal conductivity (so that when one side of the device is heated, the other side stays cool). Improving these characteristics can be achieved by metamaterial designs involving nanoscale features. 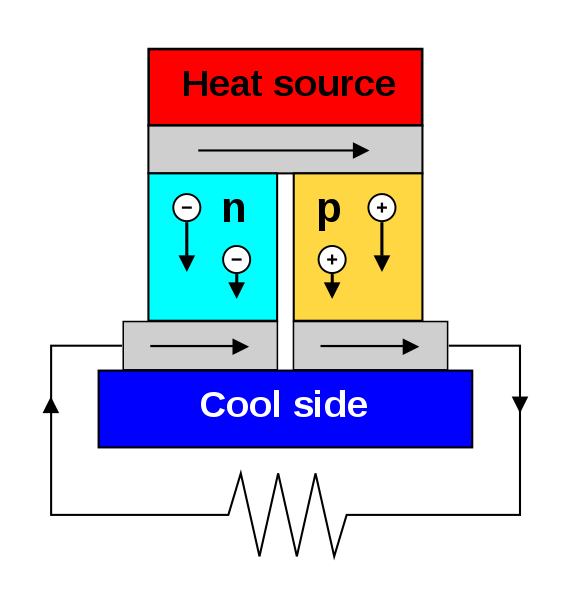 An individual TEG may be compared to a solar cell. At an average temperature difference of 140 degrees, the output of a 16 cm2 TEG is expected to be approximately 4 Watts. The surface area of 10,000 linear feet of 9.625” pipe is about 2,300 square meters. Therefore, a single well should generate about 5.75 MW of power. Twelve wells may be grouped in a 4 x 3 pad, occupying approximately 800 square feet. DC output must be converted to AC, so some additional space is required to house inverters. However, 1 MW of solar PV requires about 100,000 square feet (~2.3 acres). Including the balance of plant, 1 MW of crystalline solar PV requires about 4 acres, and 1 MW of thin film solar PV needs about 6 acres. A rule of thumb for wind turbines is 50 acres per MW. Approximate relative land use for these three renewables is illustrated below.

Geothermal TEG Yields 6x the Power in One Quarter the Land Area vs. Crystalline Solar PV

SAGE and META plan to run a three-year project to prove up TEG technology with the goal of reducing the cost of geothermal power, from the current LCOE for geothermal of $59-101/MWh, to a targeted LCOE of $40/MWh.