The Gartner Hype Cycle presents the visibility of a certain technology as a function of time. It can be applied to most technological breakthroughs, such as the invention of the transistor, the discovery of the laser, or the early stages of the internet (ARPANET). It is shown in the image below and comprises five stages.

Note that the “Plateau of Productivity” never reaches the same height as the “Peak of Inflated Expectations.”

The Hype Cycle for Metamaterials

The field of metamaterials could also be viewed through the lens of the Gartner Hype Cycle. Historically, several concepts with light-manipulating properties that would later be covered under the metamaterial umbrella have been introduced throughout the 20th century. Some examples include frequency selective surfaces [1], photonic crystals [2], and the theoretical concept of a left-handed medium[3]. However, significant interest in the field ignited around the year 2000 due to the publication of several milestone papers, including the experimental verification of a negative index medium[4] and the concept of a perfectly focusing lens[5]. This can be considered the “Technology Trigger” for metamaterials, as shown in the image below. 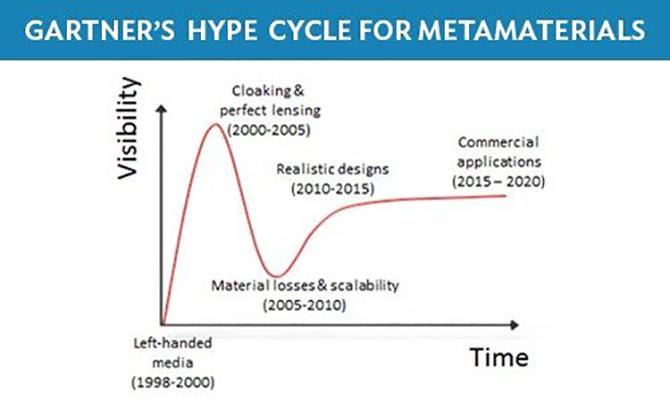 In the following years, particularly up to 2005, the field witnessed explosive growth, attracting the attention of many researchers from diverse fields of physics and engineering. At an academic level, many new concepts were introduced and new physics was demonstrated[6-8]. At the same time, the idea of an invisibility cloak[9] captured the public’s imagination as well.

It soon became clear though that many of these new concepts could not be easily converted into commercial applications, particularly with regards to optical metamaterials. Two of the main reasons for that are the inherent losses which originate from their resonant behavior, their accordingly narrow bandwidth of operation, and the fabrication challenges in scaling the structures to practical sizes more than a couple of wavelengths long. For example, it is now evident that a perfect broadband cloak for any object in the visible range is extremely challenging (if not impossible) to build[10].

Since about 2010 we have entered a period where researchers have become more aware of these limitations of bulk metamaterials and have started proposing concepts to work around them. One particular promising example is metasurfaces, which do not suffer from the same losses to the same extent as bulk metamaterials due to their thin nature.

We are currently moving the commercialization stage of the Gartner's Hype Cycle and pioneering a new era in metamaterial technology.